What do Adrenal Glands Do?

Adrenal glands produce hormones required for healthy life. The adrenal cortex produces hormones that controls sex (androgens, estrogens), salt balance in the blood (aldosterone), and sugar balance (cortisol). The adrenal medulla produces hormones involved in the fight-or-flight response (catecholamines, or adrenaline type hormones such as epinephrine and norepinephrine). The Adrenal Medulla and Cortex Produce Very Different Hormones. We have two adrenal glands located on the top of both kidneys. They are triangular-shaped and about the size and color of a fortune cookie. Each gland consists of a medulla (the center of the gland) which is surrounded by the cortex.

Function of the Adrenal Medulla.

The adrenal medulla is responsible for producing catecholamines, or adrenaline type hormones such as epinephrine and norepinephrine. We have all experienced that sudden panic feeling and anxiety when something happens suddenly and unexpectedly and we get scared. All of a sudden we have tingles and we feel like we need to run away or stand up and fight. This is the "fight-or-flight" symptoms and it is caused by the sudden release of adrenaline from our adrenal glands. (yes, adrenaline is called this because it comes from the adrenal gland). Adrenaline as we call it generically can be broken down into two different hormones that the adrenal medulla produces: epinephrine and norepinepherine.

Function of the Adrenal Cortex. 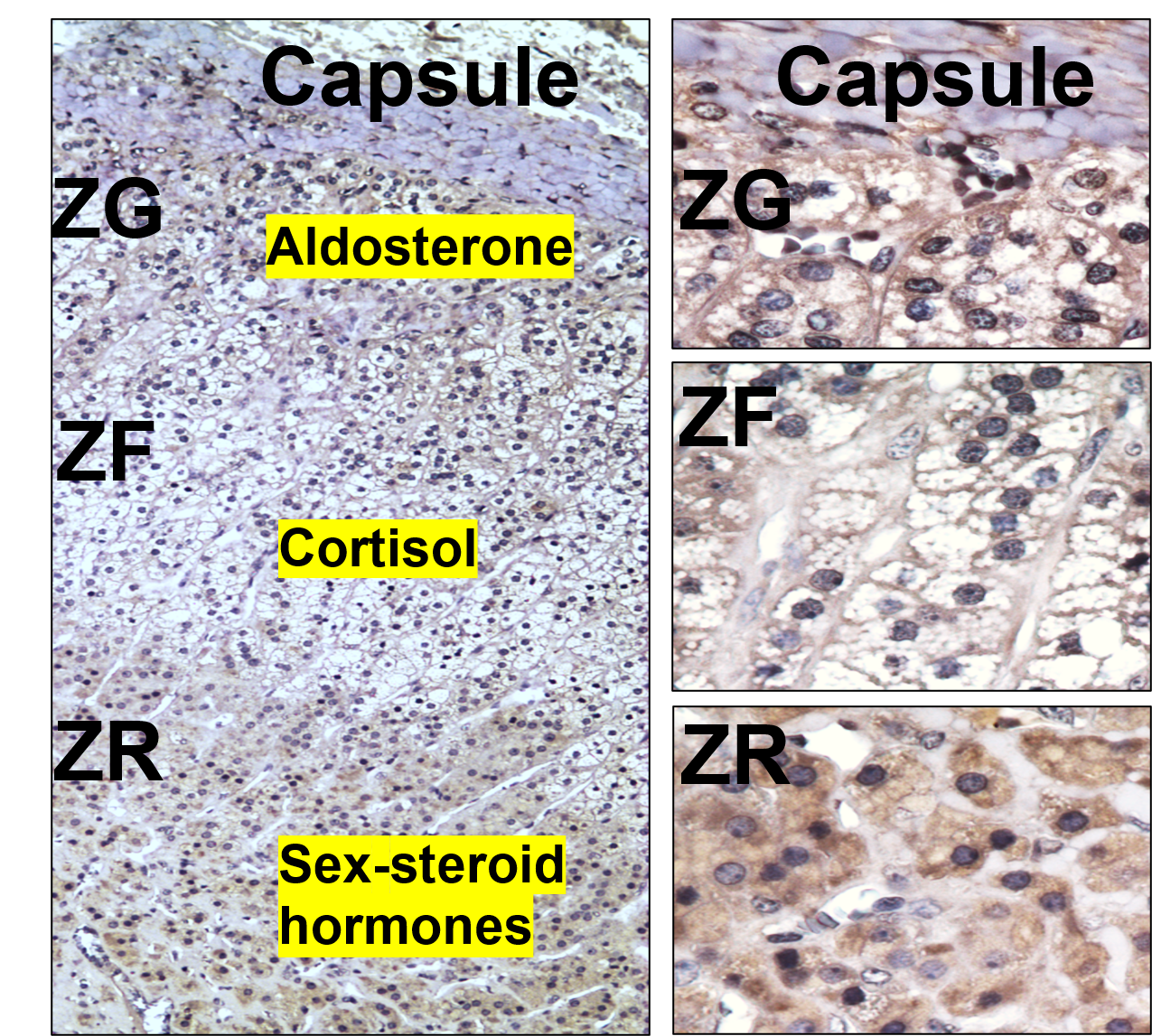 The zona fasciculata (ZF) and zona reticularis (ZR) are responsible for glucocorticoid production. Secretion of cortisol is controlled via the hypothalamic-pituitary-adrenal (HPA) axis. Hypothalamic corticotropin-releasing hormone (CRH) causes release of adrenocorticotrophic hormone (ACTH) from the anterior pituitary gland, which stimulates the adrenal cortex to release cortisol. As cortisol concentration achieves the physiologic range of 15–20 µg/dl, it exerts a negative feedback on both the hypothalamus and anterior pituitary secretion. ACTH has a plasma half-life of 25 minutes and cortisol has a plasma half-life of 90 minutes. ACTH and cortisol production is constant over life in normal, unstressed individuals. Adrenal androgen release is regulated by ACTH, whereas gonadal release of testosterone and estrogen are under a separate pathway of pituitary-gonadotrophic control. Androgen production peaks at puberty and progressively declines with advancing age.

Read more about the Mini Back Scope Adrenalectomy (MBSA). This is the preferred adrenal operation for about 95% of people with an adrenal tumor.