What is Adrenal Metastasis? 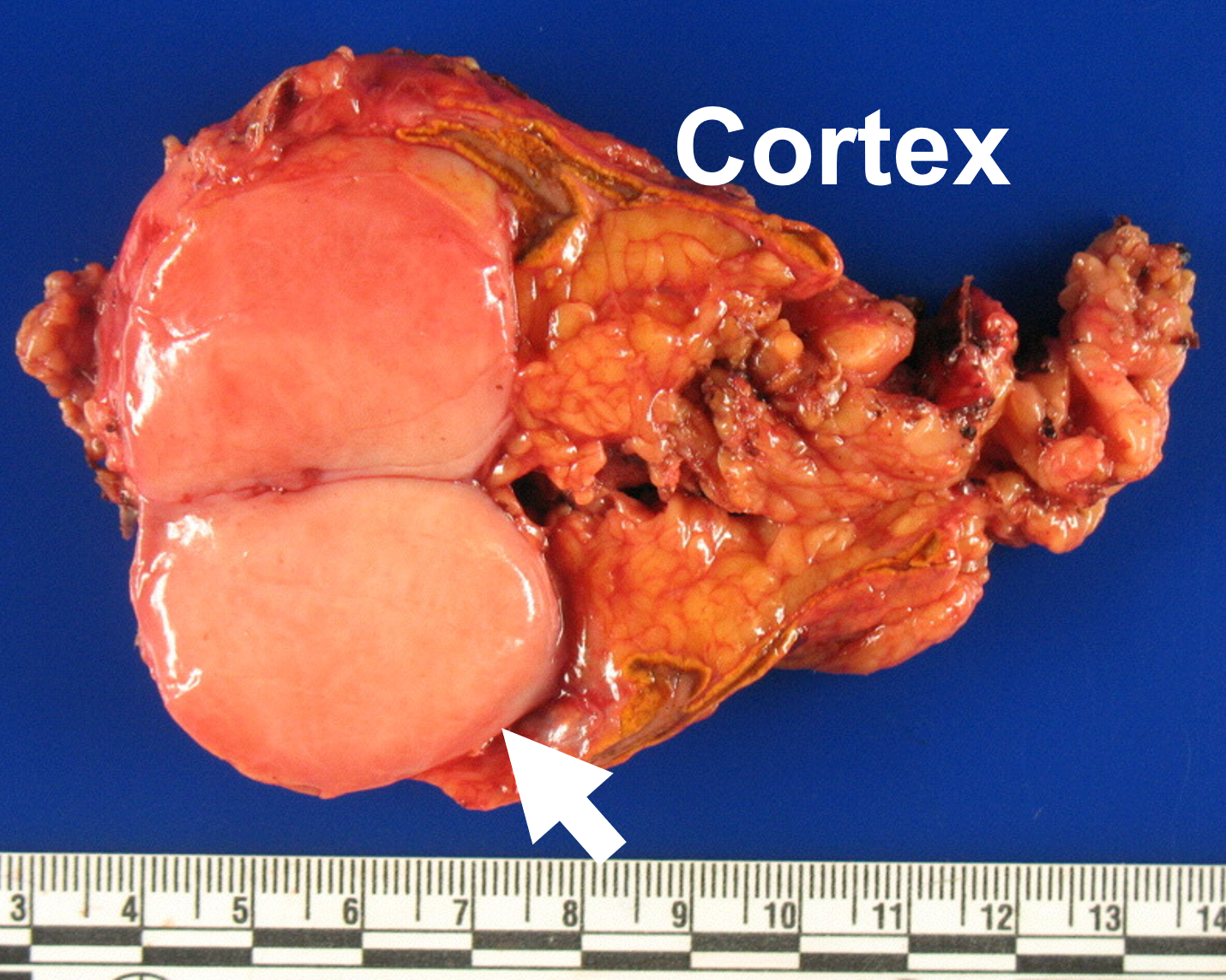 An adrenal metastasis is a cancer which has spread from another primary site to one or both adrenal glands. This is relatively common in many cancers. Nearly any cancer can spread to the adrenal glands, but some tumors are more likely than others to metastasize to this region. Having a cancer that has spread to the adrenal gland(s), means that the cancer is of advanced, Stage 4. However, if there is no other evidence of spread, the only potential cure is complete surgical removal of the adrenal metastasis. The diagnosis of adrenal metastasis would rightly cause anyone concern, it is important to note that the condition has a better prognosis than other sites of metastases. Although prospective data (large high-quality scientific studies) are generally lacking, multiple retrospective (backwards looking) investigations have demonstrated that adrenalectomy in selected patients with isolated or oligometastatic (meaning one or few areas of spread) disease from primary sites including the lung, melanoma, and kidney can result in prolonged survival duration and improved survival compared with similar patients who do not undergo adrenalectomy.

The Carling Adrenal Center created this website to educate both patients and health care providers including other doctors about adrenal metastasis. We strongly believe that educated patients are much better suited to face the challenges of overcoming their cancer.

What Cancers can Spread to the Adrenal Gland? 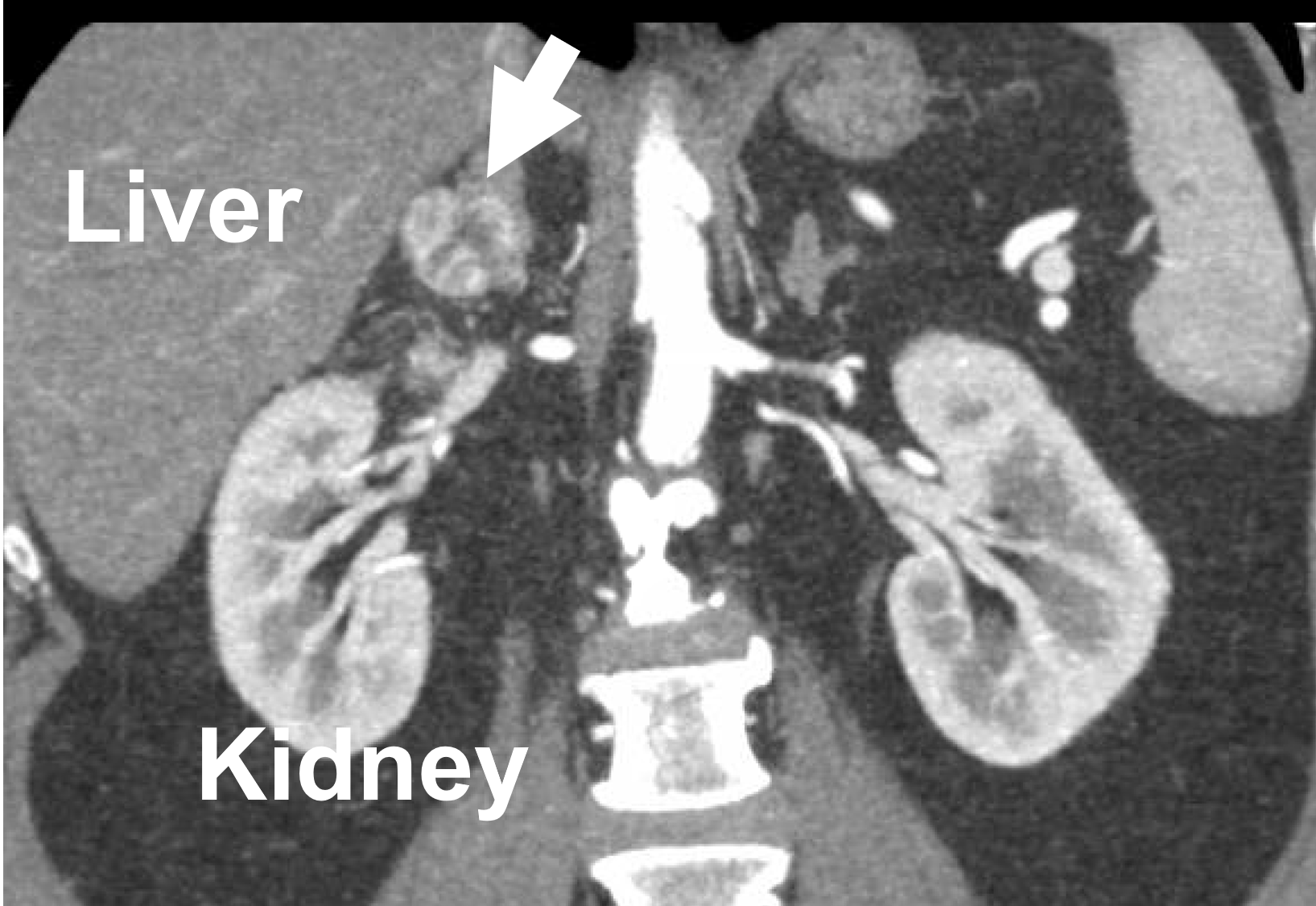 CT scan demonstrating a metastasis from renal cell (kidney) cancer to the right adrenal gland (arrow). Dr. Carling removed this tumor via the Mini Back Scope Adrenalectomy (MBSA) and the patient had no more evidence of kidney cancer.

How are Adrenal Metastases Detected? 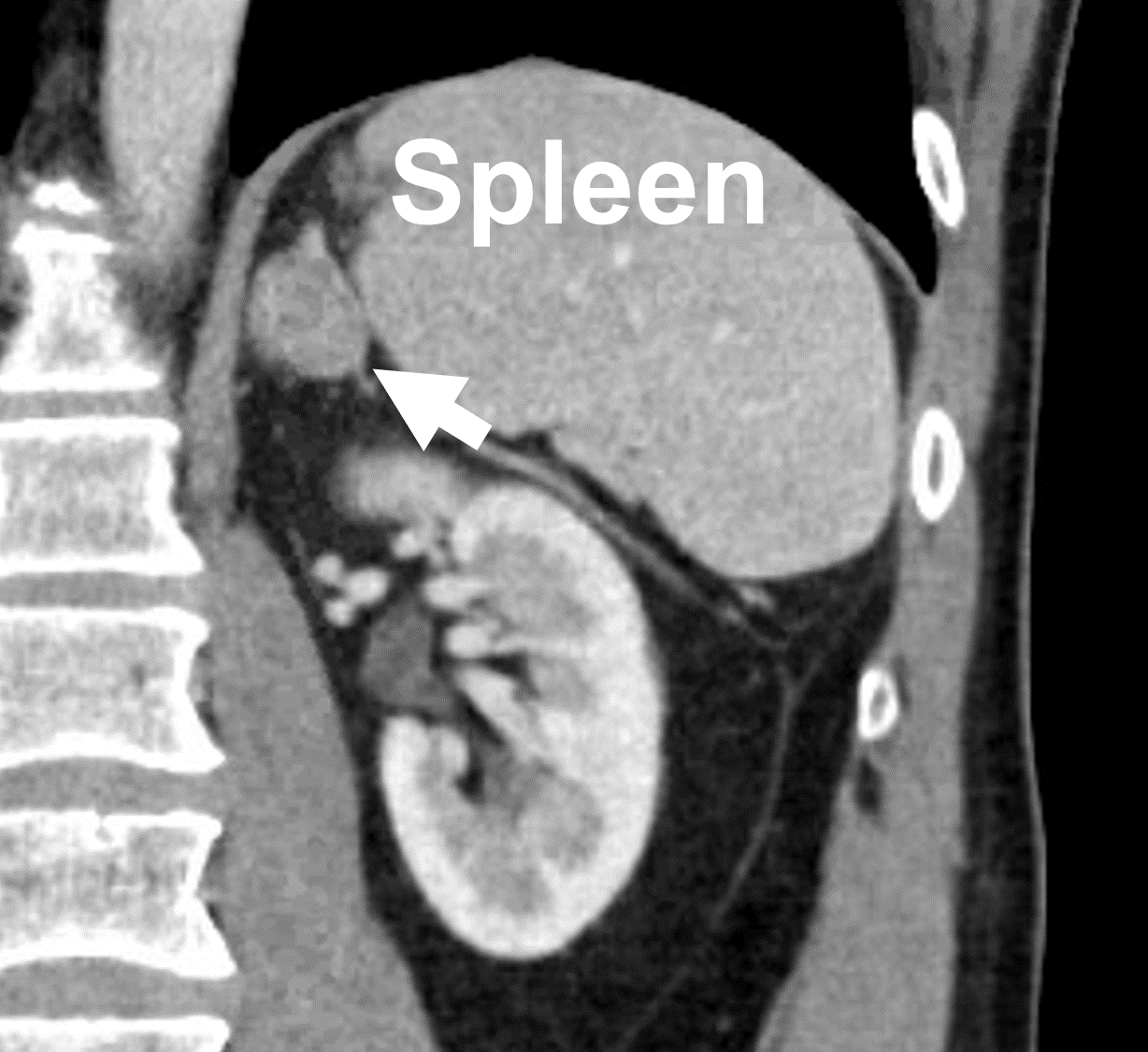 CT scan demonstrating a left adrenal metastasis from colorectal cancer (arrow). Dr. Carling performed a successful partial, cortex-sparing operation via the Mini Back Scope Adrenalectomy (MBSA) since the patients had a previous right adrenalectomy. Most adrenal metastasis do not cause symptoms. This is true for about 90-95% of cases. Most adrenal metastasis are detected on a scan, such as CT, MRI or PET scan performed before or during treatment for the underlying cancer. Sometimes, the adrenal metastasis is diagnosed due to symptoms, such as back/flank or abdominal pain, bleeding into the tumor, or rarely due to adrenal insufficiency (also called Addison’s disease) of both adrenal glands are destroyed by the cancer. If you have a scan suspicious for adrenal metastases, you do not necessarily need any further evaluation, especially if you have metastases to other regions of your body. In some cases, your doctor may wish to be certain that a mass in your adrenal gland is due to metastatic cancer and recommend a CT-guided biopsy. This is one scenario when performing aa biopsy of an adrenal gland is appropriate. Read about about adrenal mass biopsy here.

Should all Adrenal Metastases be Removed with Surgery?

NO. Not all adrenal metastasis should be removed. In fact, in most cases, removing adrenal metastases is not helpful due to cancer spread elsewhere. In such a scenario, systemic treatment with chemotherapy, targeted therapies, immunotherapy, and/or radiation therapy is better. Some people also participate in clinical trials studying new drugs and procedures. However, if you or your loved one has a solitary (single) adrenal metastases then complete surgical removal of the disease is the only potential cure. IMPORTANT: The decision to proceed with adrenalectomy for metastatic cancer requires thoughtful consideration of the natural history of the underlying cancer, tumor biology, presence of disease outside the adrenal (if any), patient performance status, and availability of alternative treatments

Is Radiation or Ablation of Adrenal Metastases as Good as Surgical Removal?

NO. Radiation (Stereotactic body radiotherapy; SBRT)) and ablation (Image-guided percutaneous ablation) is not as effective as surgical removal. However, these techniques may be beneficial in patients who are not good candidates for surgery or would not tolerate an adrenal operation.

Can an Adrenal Metastasis be removed with the Mini Back Scope Adrenalectomy (MBSA)?

Absolutely! But only if your surgeon has lots of experience--most surgeons do not even attempt this. The Mini Back Scope Adrenalectomy (MBSA) technique is ideal to address patients with adrenal metastases and for bilateral disease.