Is it Possible to Remove Only Part of the Adrenal Gland? 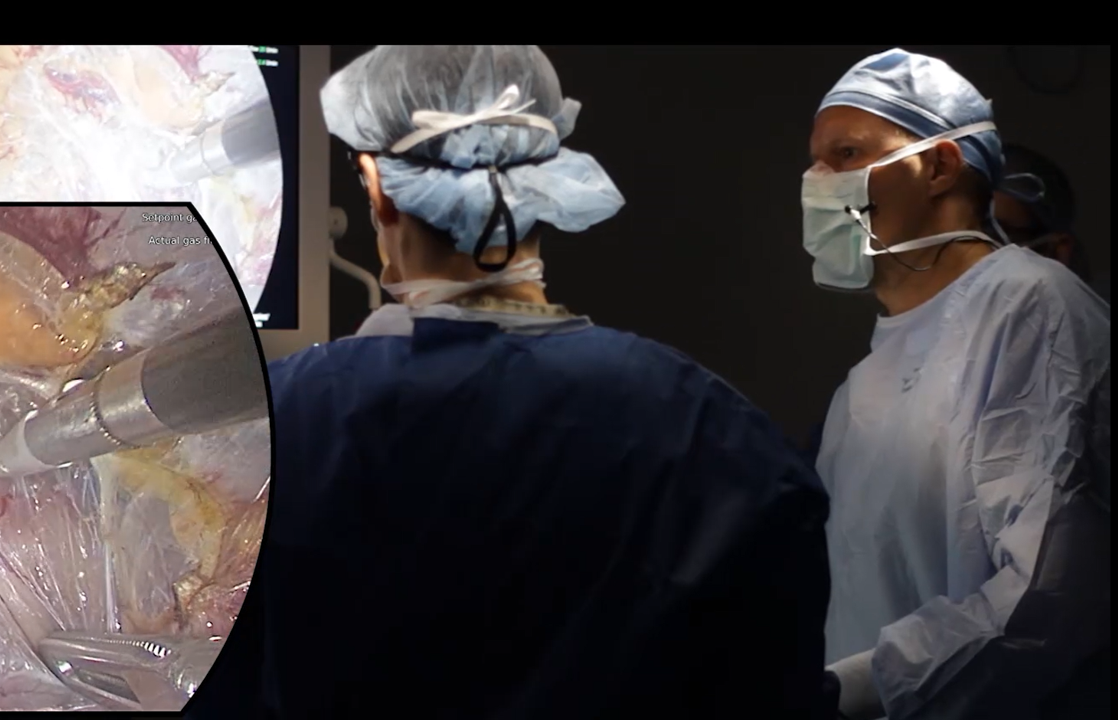 Dr. Carling performing a bilateral cortex-sparing Mini Back Scope Adrenalectomy (MBSA) in a young patient with familial bilateral pheochromocytoma. Of course, if the patient has two adrenal glands and the surgeon is going to remove just one, then a partial cortical-sparing adrenal operation is not necessary. The patient still has a complete normal adrenal gland on the other side--and all you really need is about one-third of one gland to live normally and not take medications every day. So this partial adrenal operation is only relevant if the patient has problems in both adrenal glands whereby they both must have some portion of a tumor removed.

When is a Partial Cortical-Sparing Adrenalectomy Appropriate?

For optimal results, there are four crucially important concepts the patient needs to understand about the partial, cortical-sparing adrenalectomy. The ability to perform partial (or cortical-sparing) adrenalectomy is dependent on: The key is to preserve sufficient normal adrenal cortex tissue (often 30% of one adrenal gland; or 15% of both glands) and at the same time not compromise the surgical resection margin (i.e. potentially spilling tumor cells that may lead to recurrence). IMPORTANT: both benign (for instance, pheochromocytoma) and malignant adrenal tumors can grow back (so-called "recurrence") if not resected accurately. Thus, partial cortical-sparing adrenal operations should only be attempted by the most skilled and experienced adrenal surgeons.

What is the Purpose of Partial Cortical-Sparing Adrenal Surgery?

Partial (or cortical-sparing) adrenalectomy allows for resection of adrenal tumor(s), while preserving unaffected adrenal tissue with the goal of preventing adrenal insufficiency. This is especially important in patients affected with bilateral adrenal tumors, typically pheochromocytomas, as well as those with adrenal metastasis (cancers that started somewhere else--like the breast, lung, colon, melanoma, etc--and spread to the adrenal glands). 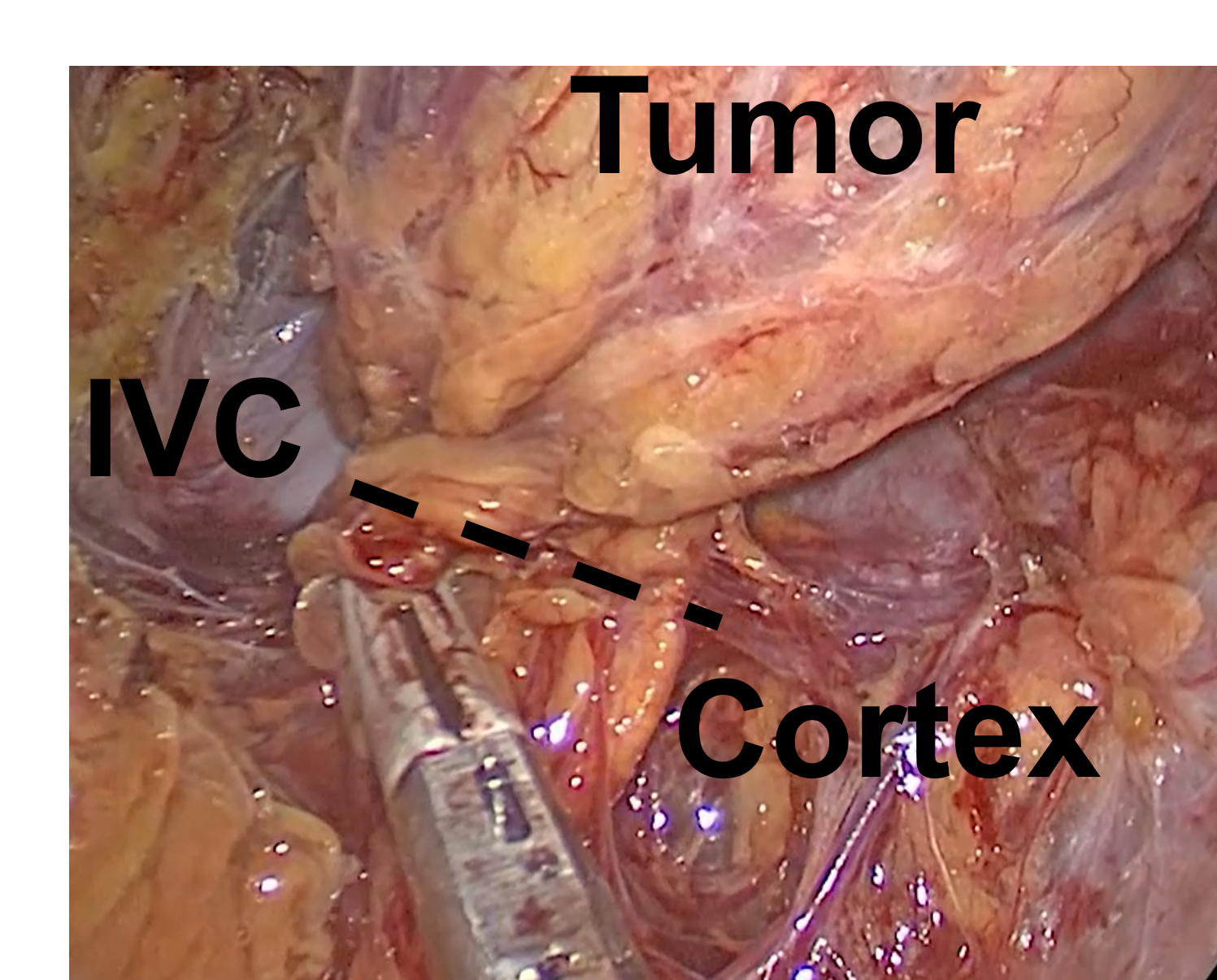 Partial Cortical-Sparing Adrenalectomy Performed via Right Mini Back Scope Adrenalectomy (MBSA). The tissue is divided at the dotted line, removing the tumor, but preserving the normal cortex and the inferior vena cava (IVC). Absolutely! But only if your surgeon has lots of experience--most surgeons won't even attempt this. The Cortical-Sparing allows for a minimally invasive approach to adrenal gland resection compared to the more traditional laparoscopic transabdominal adrenalectomy (LTA) and open (through the abdomen) adrenal surgery. The Mini Back Scope Adrenalectomy (MBSA) technique is ideal to address patients with bilateral disease (disease in both the right and the left adrenal glands) and can be utilized in patients with, for instance, bilateral pheochromocytomas in the setting of multiple endocrine neoplasia 2A (MEN2A), von Hippel Lindau (VHL) syndrome, or in patients who have had previous adrenal surgery. We have a nice video of Dr. Carling performing a partial cortical-sparing adrenalectomy via the Mini Back Scope Adrenalectomy (MBSA) for you to watch here.

Partial (or cortical-sparing) adrenalectomy is an invaluable option for patients with genetic syndromes associated with pheochromocytomas. These syndromes include MEN2, VHL, and neurofibromatosis type 1 (NF1), as well as others. Approximately 40-80% of patients with either MEN2A or VHL will develop bilateral pheochromocytomas and these tumors are usually benign. As such, cortical-sparing adrenalectomy can remove affected tissue, while leaving behind enough tissue to prevent adrenal insufficiency with minimal risk of recurrence.

Who is a Good Candidate For a Partial Adrenal Operation?

Typically, over 90% of patients who are thought to be good candidates for partial adrenalectomy (based on preoperative imaging) will be able to undergo it. It is very important to consider the below mentioned 4 concepts to determine the ability to perform partial (or cortical-sparing) adrenalectomy: Importantly, in about 10% of cases, the surgeon can find something during the operation that may indicate that a partial adrenalectomy is the wrong operation. Dr. Carling will not compromise the surgical resection margin putting his patients at risk of the disease coming back. This is where experience and excellent surgical judgment plays a huge role.

What About Patients Who Need Bilateral (both) Adrenal Glands Removed?

In cases where partial adrenalectomy is performed for bilateral adrenal tumors, >90% of patients do not require steroid supplementation (prednisone, hydrocortisone, etc). This means that >90% of patients undergoing partial bilateral adrenalectomy can be saved from developing adrenal insufficiency. In most cases with bilateral tumors, we would completely resect the entire adrenal gland on one side and then perform a partial resection on the other side. However, this has to be individualized in each scenario. The key to prevent adrenal insufficiency is to save at least 30% of one gland, or a total of 15% of both adrenal glands.

Watch a video a of Dr Carling performing a partial (or cortical-sparing) adrenalectomy.