What are Adrenal Symptoms?

High Blood Pressure Symptoms. One of the hallmarks of adrenal tumors is high blood pressure, also known as hypertension. Tumors that overproduce catecholamines (called pheochromocytoma), as well as aldosterone-producing tumors (aldosteronoma or Conn's tumor) and cortisol-producing tumors (causing Cushing's syndrome) can all cause high blood pressure. 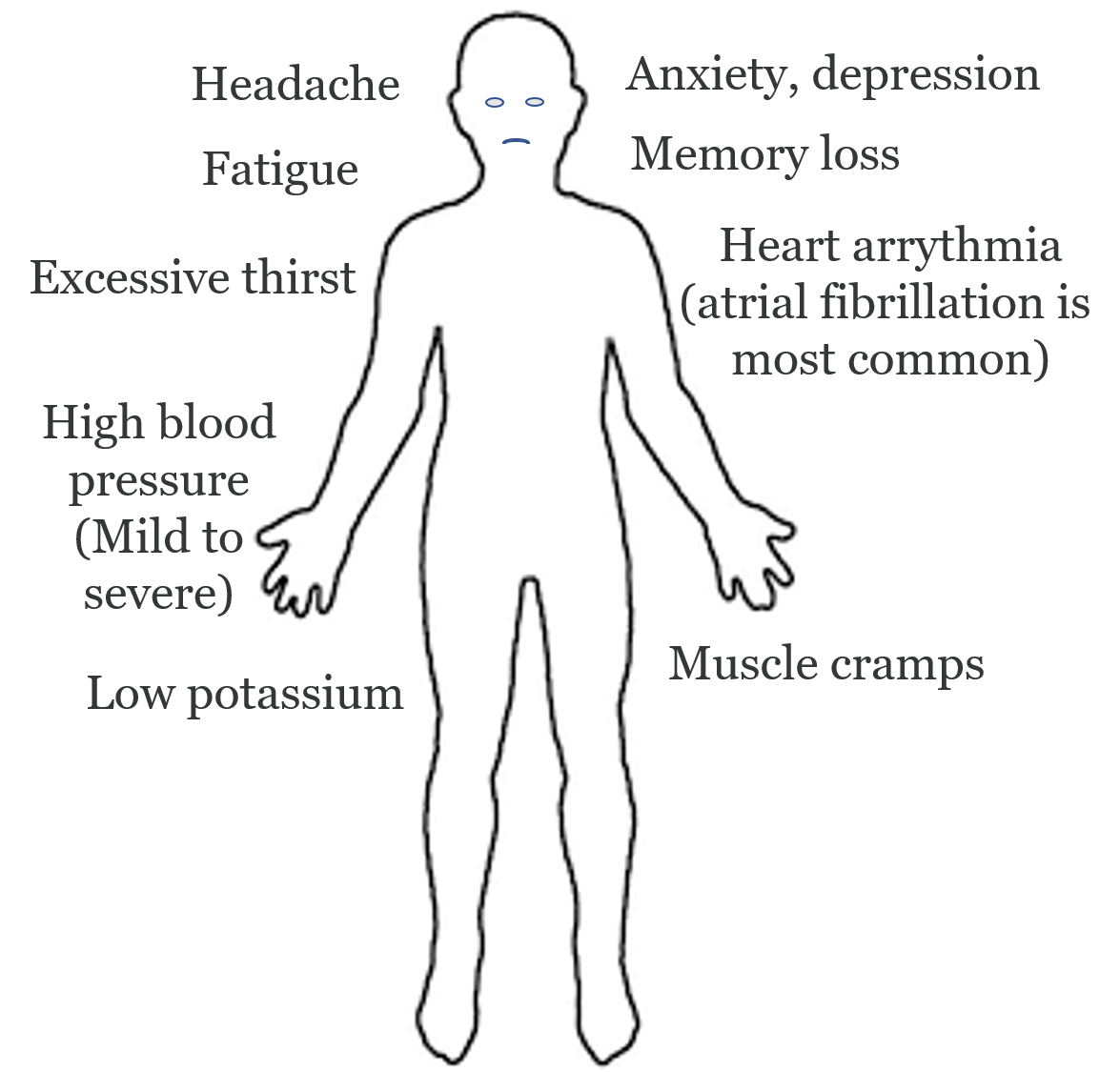 How Common is Conn's Syndrome and Hyperaldosteronism? Conn's Syndrome and the adrenal tumor that causes it are much more common than you would think--with many people undiagnosed. It is estimated that almost 10% of patients who have elevated blood pressure (hypertension) have underlying primary hyperaldosteronism as the cause and thus all doctors should be on the lookout for it. It is very important to identify these individuals since a simple operation (adrenalectomy; Mini Back Scope Adrenalectomy (MBSA) can dramatically reduce the risk of dying prematurely from heart disease and stroke. 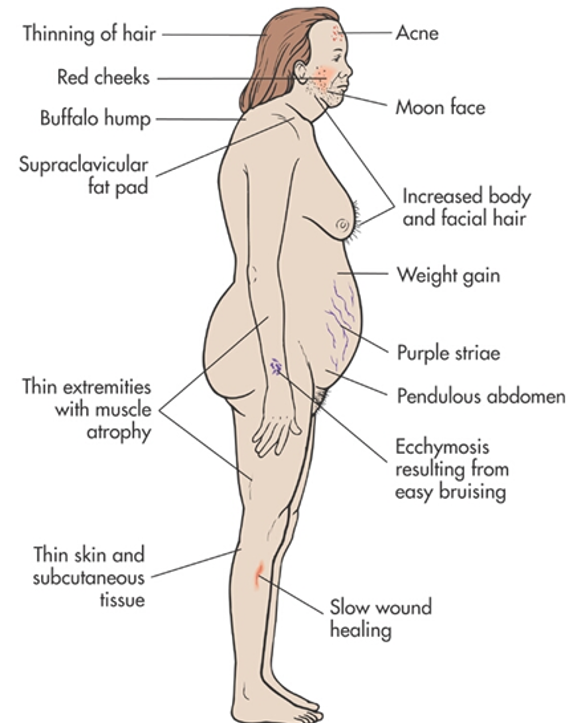 Cushing's Syndrome causes many symptoms throughout the body. If the adrenal tumor is overproducing cortisol, you will develop symptoms of Cushing’s syndrome. The symptoms of Cushing’s syndrome include weight gain and central body obesity (you store fat especially around your abdomen). Your face might develop more round features and you develop fat deposits above your collar bones and on your back (called buffalo hump). Patients may develop problems with bruising easily, thin skin and poor wound healing.

Other symptoms of excess cortisol production from the adrenal gland include stretch marks on the skin that tend to be purple (often on the abdomen) and muscle weakness in your extremities (arms and legs). It can also affect how you feel and how your brain works. Excess cortisol can cause depression and anxiety symptoms. It can cause hirsutism in many women (facial hair formation). Many patients with Cushing’s syndrome have high blood pressure (hypertension), weak bones, osteopenia and osteoporosis. The blood sugar may be increased, and patients can even develop diabetes. Also, many patients have low potassium and high white blood cell (WBC) counts.

Do all patients with excess cortisol production have symptoms? Actually, they do not. Many patients with adrenal tumors that overproduce cortisol may be asymptomatic (have no symptoms). That means they may not have any obvious symptoms. These patients are often referred to as having subclinical Cushing’s syndrome. The term "subclinical" means that there is a hormone disturbance but it has yet to be overt and easily diagnosed clinically; i.e. by a history and physical exam performed by a doctor. However, an astute doctor can often identify that when a patient has slight to obvious underlying obesity, hypertension, hypoglycemia, pre-diabetes or frank diabetes mellitus, thus can be due to subclinical Cushing’s syndrome. This constellation of signs and symtpoms often is referred to as metabolic syndrome.

It is very important to identify patients with overproduction of cortisol (whether overt or subclinical Cushing’s syndrome) since a simple operation (adrenalectomy; Mini Back Scope Adrenalectomy (MBSA) can dramatically improve the patient’s quality of life, cure hyperglycemia (pre-diabetes), hypertension and prevent the risk of dying prematurely from heart disease and stroke.

A pheochromocytoma is a tumor growing from the inner part of the adrenal gland (the medulla) and it overproduces fight-or-flight hormones (catecholamines; also called epinephrine, metanephrine, adrenaline, noradrenaline and dopamine). Thus, the symptoms of a pheochromocytoma are the symptoms of panic and anxiety. Pheochromocytoma is a tumor that overproduces catecholamines. These hormones are also called epinephrine, metanephrine, adrenaline, noradrenaline and dopamine. Of note, a paraganglioma is a similar tumor as a pheochromocytoma, but they occur in similar cell types outside the adrenal gland, for instance, along the major vessels of the abdomen, in the chest and neck. They can cause similar symptoms 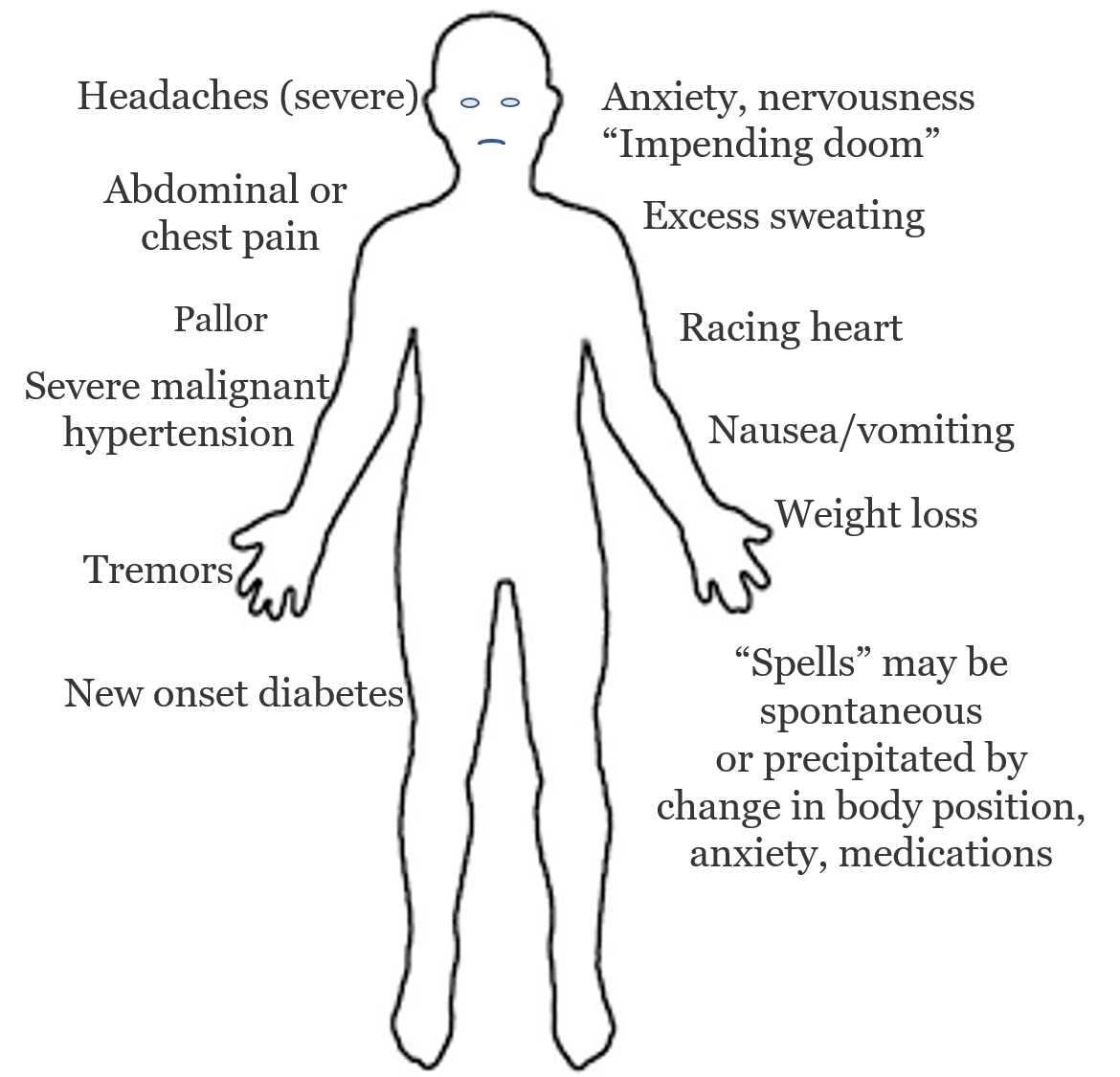 Signs and symptoms of Pheochromocytoma and Paraganglioma. The symptoms can be very variable, and some patients are asymptomatic. These are hormones that are involved in our fight-or-flight mechanism. If you ever remember getting scared you can probably remember your heart racing and beating very hard and your face flushing or getting very pale (pallor) and sweating. This is the function of the fight-or-flight hormones of the adrenal gland. These hormones are produced in the medulla (core; inner layer) of the adrenal gland.

Symptoms of pheochromocytomas often come and go. Many patients with a pheochromocytoma have a variety of symptoms. They can have spells that are extremely variable with differing symptoms each time, but the symptoms typically include heart palpitations, pallor, flushing, tremors, headaches and sweating. In other words, the patients "freak out" and have a feeling of impending doom and anxiety. They get sweaty, their heart races and they have anxiety.

The symptoms may be completely spontaneous but sometimes precipitated by a change in posture, anxiety, certain medications or maneuvers that increase the intra-abdominal pressure (for instance going to the bathroom). The physical signs when you examine patients with pheochromocytoma may include hypertension, which may occur just occasionally (paroxysmal) or sustained, as well orthostatic hypotension (meaning when you lay down the blood pressure goes down). Patients may develop tremors, pallor or in extreme cases, even retinopathy (damage to the retina of the eye), fevers, cardiogenic (heart) shock and failure. We have an entire section of this website dedicated to the diagnosis and treatment of pheochromocytomas.

Adrenocortical cancer (ACC) can cause many symptoms. Common symptoms are due to a "mass effect", which simply means the tumor is growing big so it pushes on surrounding structures and organs in the abdomen. This can manifest itself as flank, or abdominal pain or as an increase of girth (a growing waist line). Fluctuations in weight can also be seen, both weight loss and weight gain.

If you have an adrenal tumor and overproduction of sex steroid hormones, this almost always occurs in the setting of a cancerous tumor, so that is very important to know. Aldosterone-producing adrenocortical cancer, although rare, can lead to signs and symptoms of primary hyperaldosteronism. (See symptoms of primary hyperaldosteronism). Patients with adrenocortical cancer can also be completely asymptomatic (30 to 50%) but also have hypertension, osteoporosis, diabetes and low potassium. We have an entire section on the diagnosis and treatment of adrenal cancer.